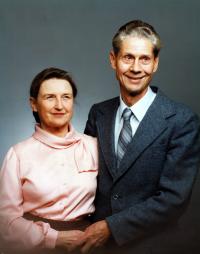 Dr. WENDELL B. ANDERSON, 77, a member of the Temple Fork Chapter, died Feb. 28, 1990. He was a professor of political science at Utah State University.  He was an eagle scout and served in the scouting movement all of his life. He obtained a J.D. degree from the George Washington Law School in 1941 and was admitted to practice law in Utah and Washington D.C. He served as a second lieutenant in the Second World War. He had a distinguished military career, receiving many honors. He retired as a lieutenant colonel. He is survived by his widow, Joyce, four sons and three daughters, 18 grandchildren and five great-grandchildren.