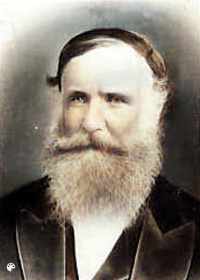 George Wood was one of the ironworkers sent by Brigham Young in 1850 to start the pig iron industry in Iron County. He was born in Darlaston, Staffordshire, England on November 13, 1822. He was baptized by Theodore Turley on June 8, 1840 and ordained to the office of Teacher under the hands of Brigham Young, Heber C. Kimball and Alfred Cordon on August 9, 1840. He married his cousin, Jane Wood, in July 1842.

George was very active in the Church in the midlands of England until January 1849 when he; his wife Jane; children Joseph, Ann and Mary; along with his brother Samuel, Samuel’s wife Jane and brother Stephen went to Liverpool to sail to America. The ship sailed 11 weeks before arriving at the mouth of the Mississippi River. George related to family members in 1858 the following incident on his journey to Utah:

“Hundreds of the Latter Day Saint emigrants had been stricken with Cholera at New Orleans and throughout the journey up the Mississippi River. The party of which I, George Wood, was a member also comprised some others who later became Cedar City residents, including Grandma Harris, Henry Leigh and Jos. W. Walker (dad). We had taken passage on a Missouri River steamer and began the journey up stream. This boat was of the usual river type with little or no convenience. The Captain was a brutal, unaccommodating and harsh man in the extreme.

“The usual method of disposing of the dead was to weight the bodies and dump them overboard. When others and I asked the privilege of removing our dead and burying them on land, the Captain was hateful and mean about it. All of my dear ones except Samuel’s wife I had to perform this last earthly service for. Others of the party had sustained like losses, and were as anxious as I to bury them as decently as possible. The Captain at last agreed to wait and we hired a Negro to help dig a trench big enough to put them in all together. We removed the dead from the boat and began our heart¬breaking task, but had it only partly done when the boat whistle blew and the boat began to get underway. All ran hastily back except the Negro, one woman and myself. She and I stood at the grave site of our dead and watched them go. What bitterness of spirit I experienced only God knows. Was this what I had come to America, the home of the brave, for? Here I was with two strangers standing beside the open grave of a group of strangers. Our common interests were all lying before us or fast receding from sight, subject to the whim of a heartless thing in human form.

“Surges of emotion swept over me, sorrow, anger, love, fear, and despair, but my nearest duty was to protect these rapidly decomposing dear forms of mine from the ravages of wild beasts, heat, and other elements. Perhaps I had been blessed and spared to perform this last service. If! were dead with them our bodies would rot together. So I urged on my companions the need for work. I felt responsible for seeing this thing through. The Negro, while of a seemingly stronger character than most, needed urging. The woman sick with sorrow and fear would do her utmost, as would I, to protect her dead. As we gathered our forces to recommence our task, there came the boat back, easing into the shore and still. A shout went out, willing hands scrambled over the side and ran to where we stood. What had happened? Did the Captain have a change of heart? Are you sure he will wait? ‘Don’t worry, he will wait,’ one spoke up. ‘There are others and stronger on the boat, but it takes a little time to find them out.’ So, we fell to the work and ere long it was finished. We rounded the mound, gathered some loose rock, paused a moment in silent tribute and walked quietly back. As we made our way back to the boat, I turned, removed my hat (presumably to wipe away the sweat), and silently consigned my loved ones and the spot upon which they lay into the keeping of Him who knoweth best. Perhaps each honest soul of all that company did likewise. But the bitter enmity of our enemies toward any they knew were “Mormons” prevented any demonstration on our part. And so we watched the spot until a bend hid it from our gaze.

“I was anxious to know what had happened. I was told there was immediate dissatisfaction on the part of nearly all of the passengers. There was whispering and counseling together in groups. Some spoke to the Captain kindly and remonstrated over his treatment of fellow passengers. Instead of relenting, he became sullen and ugly, still traveling upstream with all the speed he could command. At last, failing with kindness, Jos. Walker took it upon himself to try another method. He was a big slow, gentle speaking man ordinarily. Perhaps he was aroused to an unusual degree, but he secured a rope and walked up to the Captain. ‘Now,’ he said. ‘We’ve tried persuasion to see if there is any humanity in your wretched carcass. See this rope? If you don’t go back and get those people, I’ll hang you from your crossbeam, and I’ll have plenty of help to do so!’ Such was the power of bro. Walker.”

George Wood married Mary Davies in Salt Lake City on December 2, 1850 and they had 9 children. He built the first log cabin in Parowan, Utah in early 1851. The cabin was moved to Cedar City as the iron workers moved there to be closer to the iron ore and to a more abundant supply of cedar trees needed to form charcoal to refine the ore. That log cabin is now exhibited in the Iron Mission State Park in Cedar City. 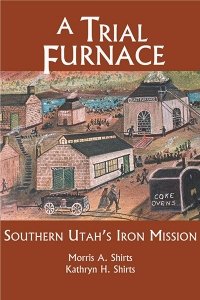 n excellent history of the iron mission is found in the book. “A Trial Furnace,” by Morris A. Shirts and Kathryn H. Shirts, Brigham Young University Press, 2001.