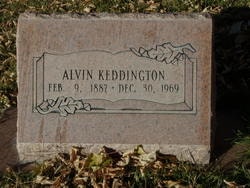 alvin keddington, 82, Salt Lake County clerk for 23 years, devoted and active member of the Sons of the Utah Pioneers and well-known singer, died December 30, 1969 in a Salt Lake hospital of natural causes . In addition to his services as county clerk, Mr. Keddington also served a number of years as deputy auditor in Salt Lake County and auditor for Salt Lake City.

Active in civic and political affairs, Mr. Keddington served two terms in the Utah House of Representatives. He attended the University of Utah and served on a proselytizing mission to Canada for the Church of Jesus Christ of Latter-day Saints.  At the time of his death he was a high priest in the Emigration Ward.

Mr. Keddington was best known perhaps as a singer.  Possessed of a magnificent bass voice, he sang with the famous White Chapel Quartet for many years and rendered services as soloist at hundreds of funerals.

He was president of the Jackson Democratic League in 1940.  In 1965, while serving his sixth consecutive four-year term as Salt Lake County clerk, Mr. Keddington announced his retirement because of ill health.

Funeral services were held Jan. 3 in the Emigration LDS Ward Chapel.  Burial was in the Salt Lake City Cemetery.