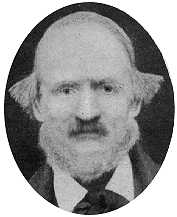 We find very little information on Allen Taylor before his work as captain of his own immigration company. However, we know that he was 24 years old when his father passed away near Nauvoo. At that time, William had 14 children and Allen was the 2nd oldest child in the family. That means that he had some serious responsibility in helping hold the family together and getting them to Utah. He was married when his father passed away but still helped his mother and siblings get to Utah. His mother, Elizabeth Smith Patrick was a determined woman and would have made the trip on her own if she had to. Nevertheless, we see that she and her dependent children traveled to the Salt Lake Valley in Allen Taylor’s company.

Allen’s company of 445 people was twice as large as any of the other four companies that traveled that year. Apparently, Allen had earned his reputation as an effective leader when he had led rescue teams and wagons back to Nauvoo to rescue stranded saints who could not go on by themselves. There were two groups of wagons and Allen’s group traveled twice as fast as the other. Additionally, Allen Taylor was appointed captain of 100 in Brigham Young’s company of 1848. He was also appointed to make sure animals and wagons were returned to Winter Quarters after the journey so others could use the same resources. This valuable leadership earned him a reputation that put him in charge of such a large company bound for Utah Territory.

Allen led his large company through many difficult situations such as stampeding cattle, wolves, alkali flats, & rattle snakes. But the weather, for the most part, was very agreeable. When they reached Fort Bridger on Oct. 1st, the weather suddenly changed with a fearsome blizzard that lasted 30 hours. That blizzard was really hard on 3 other companies ahead of Allen Taylor’s company because they were camped at South pass. In that blizzard, they lost 62 cattle. It was fortuitous that Allen and company were in the relative comfort of Fort Bridger during this storm because they did just fine. In fact, his wife bore Clarissa Elvira Taylor while there at the fort on 3 October, 1849.

When Allen’s company reached the rugged mountainous terrain encountered as they dropped from the high plains into the Salt Lake Valley, he made the wise decision to fragment the company into small groups for convenience in camping and in moving smaller groups across the numerous stream crossings. His company arrived in the Salt Lake Valley from Oct. 12 to Oct. 16. It is noteworthy to find that he only lost 2 members of his company during the journey from Winter Quarters to the Salt Lake Valley. That number is even more impressive when compared to the total of 2000 that lost their lives in the same year while making the same journey (& Allen Taylor’s company was the largest one).

After arriving in Utah, Allen settled in Kaysville. He was made bishop of that group of saints, so we learn that he was not only a good leader in moving wagons and saints west, but he was a great spiritual leader as well.

It was not long until the threat of Johnson’s Army became a major concern, so Utah was divided into thirteen military districts. Again, Allen Taylor’s leadership came to the front when they assigned him to be in charge of the Davis Military District. That stressful time was short-lived and Allen Taylor continued on as Bishop of the Kaysville Ward until 1861, when he was called to move to the cotton mission in southern Utah. He lived two years in Harrisburg, then moved to New Harmony and Washington. He established farms in both of these two latter communities and divided his time between them.

By that time, Allen had married four wives: Sarah Levisa Allred, Hannah L. Egbert, Elizabeth Smith, and Phoebe Ann Roberts. Since the writer of this article is descended from Phoebe Ann Roberts, her picture appears at the top of the biography. It is known that Allen and Phoebe had twelve children, but an inadequate amount of research was done on the other three wives to document all of their children.

When Allen was released from the Cotton Mission by erastus snow, he wanted to move to higher ground, so he moved up to Loa in Wayne County. Some of his family fragmented at that time. His first wife, Sarah, wanted to remain in New Harmony (reasons unknown). His second wife wanted to move away from the status as a plural wife, so she divorced Allen. The third wife remained in Washington for unknown reasons also. However, this happened in an era of heavy opposition to polygamy, so that probably played into these decisions. Allen’s wife, Phoebe, accompanied him to Loa. Both lived out the remainder of their lives in Loa. Allen passed away in 1891 from an infection, and Phoebe passed away in 1919. She probably was supported during those last 28 years by her loving children, many of whom remained in Wayne County.