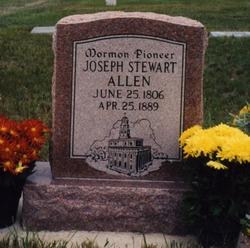 My name is Joseph Stewart Allen. I am not a large man, slightly under 6 feet and of fair skin and really curly hair.  My feet are unusually small for an adult.  I wear a boy size 4 shoe.  I love to be around people, and love talking to just about anyone.  The older I get, my hair seems to be falling out.  I just have a rim of hair just above the ears.

I am somewhat shy of these newfangled gadgets that can capture what you look like.  Besides, you have to sit for too long to get this thing done.  I believe they call it a photograph, and the gadget is a camera.  I think I don’t need one of those, people already know what I look like, so I don’t want to sit for a photo.

I joined the church of the Latter-day Saints in February, 1831 on the 3rd day.  I moved with the saints from New York to Kirtland, Ohio where I met and married lucy diantha morley, the daughter of Isaac Morley.

I joined up with the group of Latter-day Saints who were called Zion’s Camp.  It was organized by the Prophet joseph smith.  We were going to Missouri to help the troubled saints there get their homes back. We had several companies of men, each company having 12 men in it.

Every morning about 4:00, at the sound of the bugle, we all bowed in prayer at our various tents, and every evening at trumpets call, every man knelt again in prayer.  We were followed by enemies and spies to the point that we had to be very careful what we said to any stranger, and even some from our own group who were with us.

It was about the first of June when the prophet had a revelation telling us that a scourge would come upon the camp because of some unruly spirits that appeared among us, and some of us would die like sheep with the rot.  Still if we would repent and humble themselves before the Lord, the scourge might be turned away in a great measure.  Yet some of us still murmured and so we were stricken with cholera.

A number died.  There was a lot of repenting done at that time.  We realized that we were on the Lord’s errand, and should be better at listening to the prophet.

During this period of time, I had an interesting, even astonishing experience happen to me. It happened during this portion of our long tedious journey.  I was having trouble with my shoes. They were not new when we started, and as we walked along the route, they just wore out.

I went on as long as I could, but my feet were getting sore, and bleeding because I had no soles left on my shoes.  I didn’t want to complain to the prophet about my problem, because I didn’t want to be known as one of those who complained at his trials.  One day, as we were walking, I talked with my companion telling him, “I simply cannot go on any farther; my feet are too sore.”

We found a fallen log among the trees and there sat down to rest.  While there we decided that we needed to pray to Heavenly Father for help, so we knelt down to pray.  We prayed for some shoes out there in that raw, bleak country away from stores or from any town where shoes could be bought, if we had had money to buy them.

I knew that Heavenly Father would bless me because we were on His errand, but I didn’t know how he would bless me.  After the prayer we sat for a while just resting, and pondering our lives and what we were doing.  Finally we decided it was time to be on our way again, so we got up and as we were leaving noticed there beside the log a pair of shoes.

They were brand new, and my companion said, after looking at them, “They were surely meant for you, Brother Allen, they would not do for me at all.  they are too small.”  They did look very small, so I put them on, and they were a perfect fit.  What a miracle, what a blessing.  We knew then that God was with us, and we were on an important mission sanctioned by him.

Why else would He bless me with a new pair of shoes when there were no stores with in miles and miles of us. We were able to travel on in much more comfort.

We would always camp in a body even if we separated in the daytime.  Someone in lead would select a campsite and we all came to it together at night sooner or later.

One night five men rode into camp and with horrible oaths declared that an army was coming from Richmond (Ray county and Clay County) to destroy us.  The weather was fine and clear at the time but soon a black cloud rose out of the west and in about twenty minutes it began to rain and hail.

The lightning flashed all through the night and the thunder rolled in awful majesty.  Hail as large as hens eggs came down breaking down trees and causing much destruction.  The wind was so terrific that it blew many of our tents down and we had to find shelter in a nearby meeting house. However, it hailed very little in our camp. The mob came to the river two miles away but could not cross as it had risen forty feet during the night.

Our enemies had been hindered in their violent threats and their leader afterward visited the camp and related to us that he believed there must be an almighty power that protects our people.

Later on during my life, I served a mission in the South, My companion and I had made an appointment for a meeting during the evening.  It was in the spring of the year and on the day we were to fulfill our appointment we came to a stream which the day before we had crossed easily.  However, it was now so swollen with a rushing torrent of water it was impossible for us to cross on foot.

We knew about a ferry upstream some distance away but going to that crossing would make us late for our meeting.  So we did what most Elders would have done.  They knelt down and prayed for help.  On looking up we saw a big, fine man on an extra-large horse coming across the stream towards us.  They were simply floating, or so it seemed.  The horse could not possibly reach the bottom of the stream bed.

“Do you gentlemen wish a crossing,” he asked?

“Then mount with me and I will take you over.”

We got on the horse with the man and were soon safely over.  After climbing off we turned to give our thanks to our kind and extraordinary helper, but to our astonishment both horse and rider were nowhere to be seen. There was not a ripple in the water to indicate that he had gone back into the river. This event happened to me when I was 29 years old on September 2, 1839.