from History of Utah, Vol. 4 by Orson F. Whitney 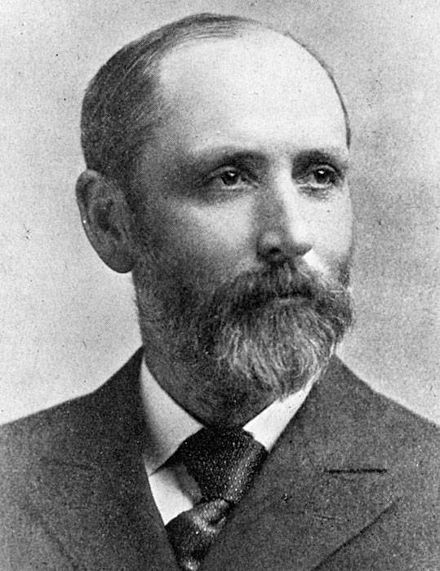 To this gentleman belongs the distinction of being the first man elected in Utah to the office of Representative in congress. Clarence Emir Allen had previously sat in the Territorial Legislature, as a Liberal, and after the dissolution of the old parties had joined the ranks of the Republicans. He was a school teacher by profession, and had been with mining companies in Bingham canyon, prior to his election to the Legislature. The following is a brief summary of his career.

A native of Pennsylvania, he was born at Girard, Erie County, September 8, 1852. His father was a dentist, practicing in that town, but living in the country, where the son attended the district school until the fall of 1860, and then spent three terms at Girard Academy. In 1868 he entered Grand River Institute, at Austinburg, Ohio, to prepare for college, and was graduated from that institution in 1872. Meanwhile he taught a district school one winter, when he was seventeen years of age. During the school year of 1872-3 he remained at Grand River Institute, teaching as well as studying. In the fall of 1873, he entered Western Reserve College, at Hudson, (now a department of Western Reserve University, Cleveland, Ohio) as a sophomore. The following year he returned to Grand River Institute as a teacher, and in the fall of 1875 returned to finish his college course, graduating with honors in the class of 1877. He worked his way through by teaching and sawing wood. In the fall of 1877 he returned to Grand River Institute as a member of the faculty, and remained there one year, when he was called to Western Reserve College to become principal of the Preparatory School. He held this position three years, but the third year taught in the College proper as acting professor of Greek.

On the 28th of November, 1877, Mr. Allen married Corinne M. Tuckerman, daughter of Professor Jacob Tuckerman, the principal of Grand River Institute. They came to Utah in August, 1881, the young husband having accepted the position of a teacher in the salt lake academy. He remained with that institution until 1886, when ill health, which had caused him to come West, compelled him to resign as preceptor. In order to get a more active outdoor life, he engaged with the Old Jordan and South Galena Mining Companies, and was thus occupied when elected from the Bingham-Tooele district to the Legislature. He was a member of the House of Representatives, in the session of 1888.

Mr. Allen was also in the Legislature of 1890, having been elected the previous fall from the fifth Salt Lake City precinct, which was then a Representative district. Says he:

“I framed the bills which passed the two houses of the Legislature and became our school law; one was for cities, the other for the Territory at large. These bills passed the House as framed; in the Council they were united and minor amendments made and passed in the form of a substitute, which in turn was amended and passed by the House and signed by the Governor. To obtain this law I had entered the Legislature.”

In 1890, on the 4th of August, Mr. Allen was elected Clerk of Salt Lake County. He served his full term, and four months over, pursuant to an extension of time authorized by an act of the Legislature of 1892. He was also appointed by Governor Thomas a member of the Board of Directors of the Territorial Insane Asylum, and served as such from April, 1890, to about the same month, in 1894.

In the spring of 1892 he was sent to Washington, D.C., to oppose the passage of the Democratic Home Rule bill and the Republican bill for Utah’s admission as a State; acting in this manner as a representative of the Liberal party, which up to that time had refused to follow the example of the People’s party and dissolve. He was also sent to the National Republican Convention, held in Minneapolis, the same year; representing the Republicans who were still members of the Liberal party. He was seated with half a vote, the opposing delegation—regular Republicans—receiving the same treatment, as a compromise to help reconcile the two factions. In November of this year Mr. Allen was admitted to the bar.

In October, 1892, the Liberals nominated him for Congress, to run against Frank J. Cannon and Joseph L. Rawlins, candidates respectively of the Republican and Democratic parties. Mr. Allen polled nearly eight thousand votes, the largest vote ever given anyone by the Liberal party at a general election. In this three-corned contest the Democratic ticket was victorious.

In 1893, Mr. Allen ran for the Legislature the third time as a Liberal. He was elected, but after election, the convention which had nominated his ticket re-assembled, and by resolution declared the Liberal party dissolved, and that those who had been elected as Liberals should act with their respective parties in the Legislature as Democrats and Republicans. Mr. Allen served as a Republican, and obtained the passage of a free library bill which Governor West vetoed. He led a successful fight against the movement to remove the University to Logan and blend it with the Agricultural College. He explained that he thought the proposed union would result in the destruction of the Agricultural College.

In the State Republican Convention of 1894 Mr. Allen was chosen permanent chairman. In 1895 he was nominated and elected to Congress as a Republican. He presented his credentials January 6, 1896, took the oath of office the following day, and thus became the first Congressional representative of the newly created State of Utah. He was a staunch silver man. In August, 1893, he had been sent to Washington to fight the proposed repeal of the purchasing clause of the Sherman Silver Act of 1890. His opposition, though vigorous, was unavailing. In April following his installation as a member of Congress, he was chosen a delegate to the National Republican Convention at St. Louis, and with Senators Teller, Dubois, Cannon and others, walked out of the convention because it adopted a plank favoring the gold standard. He served out his Congressional term, and was succeeded as Representative by Judge William H. King, of Salt Lake City.

In July, 1896, the centennial-eureka mining company offered Mr. Allen the position of general manager of its business. This offer he accepted, and since the beginning of August, that year, with the exception of three mouths, when he was completing his duties as Representative, he has filled the place to the present time. His wife is active in woman’s social and political work. They are the parents of six children and have lost one by death. Their home is at Salt Lake City.

According to Wikipedia, nn the mid-1870s, Allen pitched collegiately for Western Reserve College, now known as Case Western Reserve University. He is credited as the first college baseball player to perfect the curve ball, and notably never lost a game once mastering the “curve.”[3] With fellow college teammate, John P. Barden, Allen played professionally with the Erie Keystones during the summer of 1876. While in Erie, he learned the concept of a curve ball from a competitive Pittsburgh pitcher, perfecting it in the college ranks.