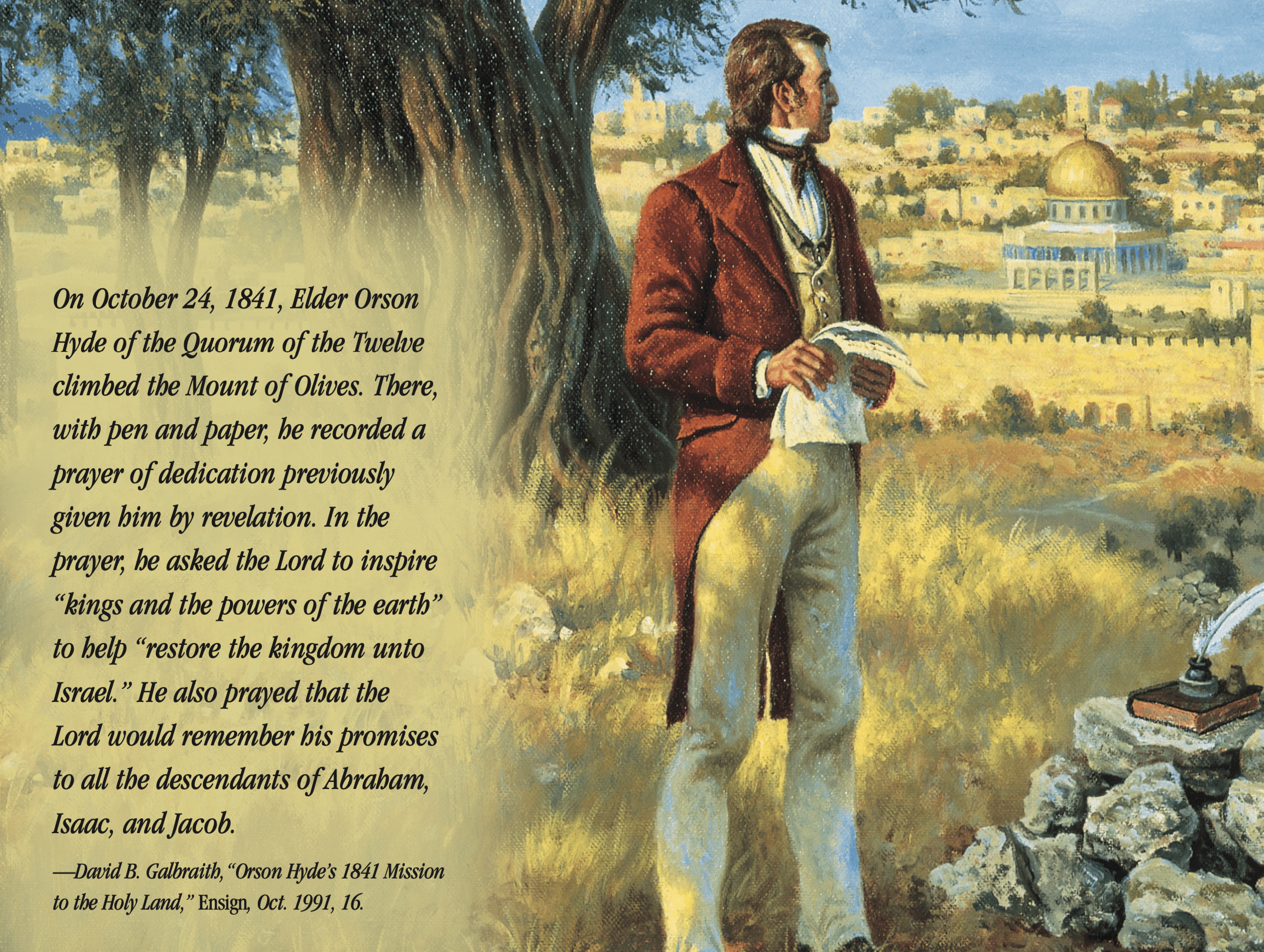 This article first appeared in Pioneer Magazine 2010, Vol.57 No.1

In the first years following the 1847 founding of a refuge in the West, The Church of Jesus Christ of Latter-day Saints, under inspired leadership, achieved a remarkable work. It began to conquer a desert, establish a core of settlements, gather thousands of refugees to Deseret, and courageously take the gospel to many nations of the earth.

In the general conference of October 1849, Franklin D. Richards was called, along with others, to a mission in England. Elder Richards was to succeed Orson Pratt as mission president. missionary work in Great Britain had continued with great success following the short mission of Parley P. Pratt, Orson Hyde, and john taylor in 1846–47. Thereafter, Orson Spencer and then Orson Pratt directed the mission. Thousands of converts entered the Church between 1847 and 1850. Elder Pratt also supervised the emigration of over three thousand people to Kanesville, Iowa, in the first use of the Perpetual Emigration Fund in England.

Elder Franklin D. Richards officially replaced Orson Pratt as mission president in England on January 1, 1851. Under his able leadership for the next seventeen months, thousands more joined the Church, and arrangements continued unabated for the gathering of these Saints to Zion. Both Orson Pratt and Franklin D. Richards published numerous tracts, which helped the missionary effort. The most important publication, however, was a compilation of several revelations and books of scripture translated by the Prophet Joseph Smith, which the English Saints had not previously seen. Elder Richards aptly named this compilation the Pearl of Great Price. This small volume, first published in 1851, became the foundation for the scriptural book by the same name that would be accepted as a standard work of the Church in 1880. (See “Early Missionary Tools for Preaching the Gospel,” pp. 34–35 this issue.) Clearly the British Saints contributed greatly to the strength of the Church. Of the thousands who gathered to Zion in the Rocky Mountains in the nineteenth century, over half came from Great Britain.

Other members of the Twelve introduced the gospel to the continent of europe. John Taylor directed the first missionary activity in france and Germany in 1849 and 1850. The revolutions that racked Europe in 1848 so stirred society there that Elder Taylor and his companions found little success in either nation, but the Book of Mormon was published in both French and German, and a branch of the Church was established in Hamburg, Germany. Sporadic missionary work continued in Germany for several more years.

Elder Lorenzo Snow, assigned to take the gospel to Italy, arrived in the Piedmont region in June 1850 with two companions, joseph toronto, a native of Italy and T.B.H. Stenhouse, a convert from Britain. The missionaries enjoyed some success among a Protestant group known as the Waldenses but were unsuccessful with the larger Catholic population. Lorenzo Snow arranged for the translation of the Book of Mormon into Italian and sent the first missionaries to malta and India. In December 1850, Elder Stenhouse introduced the gospel to Switzerland. In February 1851, Elder Snow dedicated this land for the spreading of the gospel. The work there progressed slowly but steadily throughout the 1850s, and Switzerland became the third most productive mission of the Church in Europe after England and Denmark.

The task of taking the gospel to Denmark was given to Elder Erastus Snow of the Twelve. He arrived in 1850 and enjoyed almost immediate success under Denmark’s strong constitutional guarantee of religious freedom. From among the many converts, Elder Snow set apart 150 native missionaries, who in turn helped speed the dissemination of the gospel message. From Denmark the work quickly spread to Norway, Sweden, and Iceland. Although not as many converts joined the Church in these other countries as in Denmark, all of Scandinavia contributed thousands of Saints to the great gathering to Zion during the next fifty years.

During this time of renewed international missionary zeal, many courageous attempts were made to take the gospel to other nations of the earth. These were usually only marginally successful. Parley P. Pratt was assigned the responsibility of heading the Pacific Mission and sent missionaries to China, hawaii, australia, and New Zealand. In 1851 he went to Chile but a revolution paralyzed his efforts. The T’ai-ping Rebellion in China thwarted hosea stout’s work there. Labors in Australia and New Zealand bore some fruit, and a few immigrants came to Salt Lake City in the 1850s

The greatest success in the Pacific was in the Hawaiian Mission, which was opened in 1850. George Q. Cannon felt impressed to take the gospel to the native islanders instead of only to the Europeans and Americans. Learning Hawaiian, Elder Cannon and the brethren who followed him found thousands of people ready to accept the gospel.

Missionary work was also strengthened again during the civil war. While virtually little missionary activity occurred in North America during this time, the Church grew throughout Europe. The development of the transatlantic telegraph greatly aided communication with the European Saints. In 1860 the First Presidency sent three members of the Council of the Twelve—Amasa M. Lyman, Charles C. Rich, and George Q. Cannon—to preside over both the British and European missions, headquartered in Liverpool. These three Apostles presided over the European mission until May 14, 1862, when Elders Lyman and Rich returned home. Elder Cannon went to Washington, D.C., to work briefly on obtaining statehood for Utah; then he returned to England to preside until his return to Utah in 1864.

Using native British and Scandinavian missionaries where American elders were not available, these Apostles rejuvenated the gathering of Israel both in the British Isles and on the European continent. The number of conversions surged again following a decline that had occurred during and after the Utah War. England and the Scandinavian countries were the most fertile fields of labor. To save costs to the Church, Brigham Young directed the missionaries to travel “without purse or scrip” and to obtain their board and bed from willing members of the Church. Most missionaries also had children and wives who would have to support themselves, with backup from local quorums of the priesthood.

In the fall of 1860, John W. Young brought immigrants by ox teams from the Missouri River after having taken an ox train of produce to the East to sell to provide for immigrants. Thereafter, ox teams were sent from Utah in April with provisions for the yearly immigration, and they returned with immigrants in the summer and early fall. Young men were called as missionaries to be teamsters for these “Church trains.” Between 1861 and 1868 the Church brought more than sixteen thousand Europeans to Utah at a reduced cost because the Saints gave teams, labor, and supplies. Furthermore, fewer supplies needed to be purchased from outsiders.

The Church continued to grow in other parts of the world as well, but not without opposition.

In New Zealand, Elder Robert Beauchamp, a missionary from Melbourne, Australia, was peppered with rotten eggs in Wellington. On another occasion he escaped injury through the intervention of his Heavenly Father, who hid Elder Beauchamp from the eyes of the wicked men who were going to tar and feather him.1

In Scandinavia, Elder Knud Peterson reported that during the year 1871, 1,021 souls were baptized into the Church. He continued, “A good many of the native Elders have been appointed to missions during the winter.” Crowded meetings were reported in Sweden, although in that country and Norway, Church elders “are still subjected to fines and imprisonment for administering the ordinances of the Gospel. In Norway exists religious liberty for all Christian denominations, but the supreme court has passed the strange sentence that the church of Jesus Christ of Latter-day Saints is not a Christian religion,” and therefore Church members were denied religious freedom. The Saints in Norway were also very poor, but 630 of them had raised sufficient means to emigrate to Zion that year.2

During the last decade of his life, Brigham Young continued to extend the borders of the Latter-day Saint commonwealth by colonization and to oversee further expansion in missionary work and immigration. By the end of his life, Mormon colonies had been established in Arizona, and missionary work extended into the Republic of Mexico.