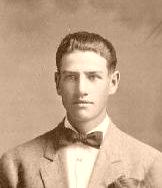 Cleon was set apart for his mission to new zealand on November 22, 1911, by Elder Rulon S. Wells. It appears from his letters home that he enjoyed his service to the Lord, and by all accounts stayed in touch with his family. In an undated letter to his Aunt Gean, Cleon wrote:

“I am enjoying good health and am enjoying my labors very much. . . . I am laboring among the Maori people. I am laboring in a district that Ezra labored in about twelve months. I wish Ezra was out here now….Love to all, From Cleon.”

“On 8 January of 1913 . . . in the middle of the night I was awakened and actually heard a familiar voice. My wife was sleeping soundly at the time, and I recognized this voice as that of Cleon’s and, although I recognized no form, this voice spoke distinctly and clear; it said, as I remember, ‘I am your son, Cleon; I can see you but I realize that with my spiritual or etherealized body, you can not recognize me. I have now departed from this life, my mission on this earth is completed, and I have been assigned a special task to perform on the other side. The glorious abode I am privileged to abide defies all manner of description pertaining to its magnificence and glorious splendor.

“‘Be of good cheer! All is well! Tell Mother in the morning to not grieve, that she will soon learn and hear of my death. I have been granted, through the merciful providence of the Divine Creator, to make this visit in order to bolster Mother, especially in this hour of her bereavement, since she had already borne her cross at the passing previously of Lloyd’s [another son] transition and initiation into the heavenly realm. Without this assurance of my spiritual well-being, such an occasion would be too much of a shock for her.’”

Albert explained that after this visitation, a feeling of peace, tranquility, and serenity permeated his soul, the like of which he had never before or since experienced. He said this apparition almost transcended him upon a higher and loftier plane of consciousness; he experienced no sorrow or apprehension; it was as if a feeling of bliss and exaltation crept over him, indescribable or unexplainable in earthly terms.

It was only a short while after this heavenly visitation that the family received the telegram announcing Cleon’s death. In the meantime Albert informed his wife of Cleon’s visit and the message he was permitted to give— this divine or spiritual experience had its soothing and comforting effect. Very infrequently are we, as individuals, permitted to witness such heavenly or spiritual manifestations, and Albert’s description of the event is most awe inspiring. Cleon must have been an illumined soul to have been in attunement with the infinite during his mission. 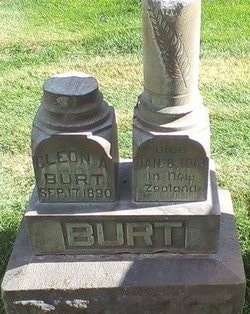 “My mission was getting close to an end, about six months at the very most. . . . Then, early one Saturday morning, I got a telegram informing me of the death of Elder Cleon Burt; and it said for me to pack my trunks and get the Wednesday boat back to Auckland, the mission headquarters. . . . Monday morning we. . . traveled about 50 miles that day by horseback through trails—very few roads. We got over to the district head-quarters late in the afternoon . . . where I started gathering up my things and packing my trunks. . . . I had about 20 miles to travel by train. . . . When I got to Auckland, they informed me definitely that I would be in charge of the body—taking it home—which apparently seemed like a tremendous responsibility . . . but it really wasn’t.”

Elder Cleon Burt is buried in the Brigham City Cemetery, with a large marker stating that he died in New Zealand.