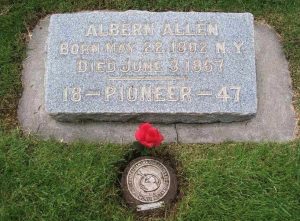 In a rapidly changing world, Albern Allen was born four months after Napoleon was elected President of Italian (Cisalpine) Republic, and just 1 day before Washington DC was incorporated. We know little of Albern’s childhood, other than the fact that he was born in Cornwall, Leitchfield, Connecticut on 22 May, 1802 to Daniel Allen(2 Mar 1777 – 22 Dec 1835) and Clarissa Dewey(28 Feb 1773 – 30 Dec 1804?). But by the time he was four years of age, we know Daniel Allen had moved to Hartwick, Otsego, New York, as evidenced by his younger brother, Daniel Dewey being born there. Yes, that would mean that Daniel had either remarried by then, or Clarissa didn’t die until about 1806 but this hasn’t been resolved yet. One thing we do know is that Albern met, fell in love, and married Marcia Allen (6 Nov 1804 – 25 Feb 1866) sometime in 1826 in that same county. Marcia and Albern were not related, even though they shared the same last names. Records going back eight generations show their lines going different directions.

At some point, Albern and Marcia moved to Cattaraugus, Cattaraugus, New York, and joined The Church of Jesus Christ of Latter-day Saints in 1835. Following his baptism, he and his family migrated from New York to Missouri to be with the Saints. They settled in Caldwell County, Missouri, in 1836. In July 1838 Albern was ordained a seventy by Joseph Young (Early Church File). Just a few months later, the terrible persecutions of the Missouri saints reached their peak, beginning with the slaughter at Haun’s Mill.

History tells that Haun’s Mill could have been only the appetizer to the slaughter that almost happened in Farr West as told in the following account: “The mob grew bolder and bolder, and committed depredations upon the settlements in Caldwell and Davies Counties, so that our people had to flee into Far West from all quarters to save themselves. Many could not get into houses, and had to take shelter in wagons, tents, and under bedclothes, and while in this situation we had a severe snow storm, which rendered their sufferings intense.

On the morning of November 1st, Hinkle [a leader of the militia that was to exterminate the saints] took another step to carry out his nefarious designs. The bugle sounded for the brethren to assemble, armed and equipped. Every man went out well armed and was paraded and delivered over to the enemy. The brethren were surrounded and required to surrender their arms, and were then guarded all day while the rapacious soldiery went from house to house, plundering, pillaging, and destroying, and even driving many helpless women and children from their homes, and committing deeds even worse than these in some instances.

A court-martial was held by the officers and priests, and without being heard in their own defense, the brethren were sentenced to be shot on Friday morning on the public square in Far West, in the presence of their wives and families. At this unprecedented action General Doniphan objected, saying he would have nothing to do with such cold-blooded actions, and he would draw off his brigade from the army. This probably saved the lives of the prisoners, as the sentence was changed and the prisoners were taken to Independence, Jackson County.”

Though they were not slaughtered, they were forced to leave their homes and belongings and move on in the middle of winter. So, in the winter of 1838-39 he and his family fled from religious persecution to Adams County, Illinois. In doing so, they were forced to sign over their Missouri property of 80 acres to the mob. Several sources show that Albern filed a petition on 7 January, 1840 before justice William Laughlin of Adams County, IL, seeking $1320 in redress for his suffering in Missouri (Johnson, Missouri Petitions .  The petition included $150 to leave the state, $600 for land, $100 in stock, $50 in beef and pork, $20 for farming utensils, $400 moving because of extermination order.

He and his family resided in Nauvoo, Hancock County, Illinois, from 1840 through 1846. There he paid taxes and bought property (Nauvoo City Tax Lists; Nauvoo Property Transactions). He was a member of the Nauvoo 3rd Ward and served as a lieutenant in the Nauvoo Legion.

Albern left Nauvoo to serve a short mission to the southern states. Upon his return to Nauvoo, he participated in temple ordinance work, including baptismal ordinances for his father, Daniel Allen; his uncle, Orlo Allen; and his cousin, Sally Comstock. He received the endowment on 1 January, 1846 and was sealed to his wife Marcia Allen on 24 January 1846 in the Nauvoo Temple. Albern was called to be the senior president of the Thirty-third Quorum of the Seventy in 1846 (Jenson, Church Chronology). Life in Nauvoo was beautiful. The Allen family prospered along with the growing and thriving city of Nauvoo. But those six years of prosperity and happiness ended abruptly also when the mobs drove them from that city.

We don’t have any record of Albern’s work while in Nauvoo, but we do know he was skilled at making ox bows. Thomas Bullock kept a journal and made the following statement concerning Albern:

“Attending the oxen in the wood all day also in the evening assisting Albern Allen to make the ox bows. Harder work than I’ve been used to. Beautiful day.”

This sounds like our Albern was used to hard work. The picture of the ox yoke shows the bent wooden bows fitted in the yoke to keep the oxen harnessed to the wagon.

The Nauvoo exodus began on April 2, 1846 in a cold snowstorm. The destitute saints had run out of supplies, resources, and had little hope of any source of income by this time. But the national scene was focused on Mexico and that would prove a boon to the starving and freezing saints. The next month saw some skirmishes with Mexico and the United States declared war on Mexico on May 13. That opened a door of opportunity for the saints to join in the war and provide for their families during these difficult times. After arriving in Council Bluffs, Albern and his oldest son, Rufus Chester, enlisted in the Mormon Battalion in Company “A”. At the time of their enlistment, Marcia, with her aged parents, brothers and sisters, and the rest of the children, were ill in a wagon. It is difficult to imagine how hard it must have been for these two men to leave their families in such desperate circumstances.

Again, quoting from the pioneer records of Nauvoo: “As father and son marched with the Battalion they were often asked to serve picket guard duty. On 17 December, 1846, near Tucson, they were instructed to fire an alarm and run into camp if more than a dozen Mexicans passed in or out of town. About midnight Albern and Rufus fired their signal guns (Tyler, Concise, 228-29). Excitedly, Lieutenant George Oman shouted, “Beat that drum, beat that drum–if you can’t beat that drum, beat that fife.” Within ten minutes the men formed a battle line on either side of the road (Pace Diary, 17 Dec., 1846; Dunn Journal, 17 Dec., 1846). Fortunately, the signal proved a false alarm, and no battle ensued.

Albern marched with the Battalion from Tucson to Ciudad de los Angeles where he was discharged on 16 July,1847. After being discharged, he and his son migrated to the Salt Lake Valley via Fort Hall in 1847. In 1848 they met their family about one hundred miles east of Fort Laramie, on the Platte River. There they learned that two of Albern’s younger children (Rachel, age 10, and Sarah Ann, age 3) had died in Winter Quarters, Nebraska Territory.

The family migrated from Wyoming to Utah. They located in Ogden, Weber County, in 1849. By 1850 Albern was considered Ogden’s most notable farmer, even though his real wealth was only $50 (Utah Federal Census, 1850). He produced 450 bushels of wheat, 40 bushels of Indian corn, 50 bushels of corn, 100 bushels of potatoes, 25 bushels of buckwheat, 100 pounds of butter, and 250 pounds of cheese on a twenty-acre farm valued at fifty dollars.

Albern served as a president of the Thirty-third Quorum of the Seventy. He represented Weber County in the Utah Legislature for two terms. He was also a member of the Weber Stake High Council (13). During these busy years, he participated in the law of plural marriage with Mary Ann Hoops Yearsley, Mary Jane Morris, and Jane Elizabeth Hill (TIB).

The following is quoted from an article from the Nauvoo Visitor Center: “On 19 April,1857 Albern was given his patriarchal blessing by James Lake (patriarchal Blessing Index, 701: 19). Later that spring he accepted a mission call to Canada. He crossed the plains pushing his possessions in a handcart. In Genoa, Nance County, Nebraska, he was asked by Apostles John Taylor and Erastus Snow to remain in Genoa and preside over a small branch of the Church (Carter, Treasures, 2:430). He presided in Genoa until 1858 when he returned to Ogden having never served his mission in Canada. Albern was selected as a counselor to Bishop Edward Bunker of the Ogden Third Ward. He became known as a liberal, broad-minded man who was willing to render both financial and spiritual aid (14).

On 16 November, 1982, at four in the afternoon, descendants of Albern Allen met at his gravesite to place a Mormon Battalion marker. ”

Marcia Allen’s parents were also converted to the Church of Jesus Christ of Latter-day Saints in July of 1836 and came west as pioneers. Their story will be listed under the name of Gideon Allen.

I find the following relationship interesting. Albern & Marcia’s oldest son was Rufus Chester Allen, my 2ggf. In 1852, Albern married Mary Ann Hoops of my Yearsley line as a second wife; her husband had died at Rocky Ford, IA. Her oldest daughter was Lavenia Elizabeth Hoops Yearsley, who Rufus Chester married in 1853. That means that Rufus Chester married his step-sister, but that relationship was not a blood line. It also means that Albern married my 2ggm on the Yearsley side of the family; therefore, I have blood lineage through Albern and both his first and second wife. It is no wonder that some genealogy lines get mixed up.

Albern Allen died on 3 June, 1862, in Ogden, Weber, Utah as the world continued to transform itself toward the modern age of machinery and world governments. It was just 17 days before the world found that J Gilpatrick had won the 1st Belmont aboard “Ruthless”, and just 13 days after British Parlament rejected John Stuart Mills law on women sufferage.

The State of Missouri To Albern Allen Sr.- as follows (to wit)

To loss of time on the account of the Governors Orders,

Moving on the account of the Governors exterminating Orders $400.00

[p.415] This day personally appeared before me Wm. Laughlin Justice of the peace within said County Albern Allen who Duelly Sworn according to Law Deposeth and Saith that he Moved to Caldwell County Missouri 1836. I entered 2 fortys of which I gave up the Duplicates and the N.E. ¼ of S.W. ¼ of Section 32 Township No.56 Range 28 North of the base line and west of the 5th principal Meridean also the NW ¼ of the South E ¼ of Section 32 Township 56 Range 29 North of the base line of the 5th principal Meridian Also 80 Acres of which my Duplicate will Show Also 40 Acres I gave up my Duplicate and Cannot ascertain the numbers which Land I had to leave after being taken prisoner and obligated to assine away My right and Compelled to leave the State by the Exterminating Decree of the Governer