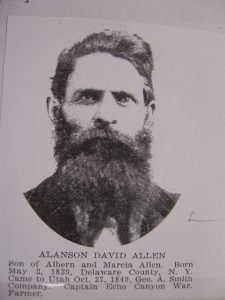 Alanson David Allen was born May 1, 1829 at Deposit, Tompkins, Delaware County, New York. He was the son of Albern Allen and Marcia Allen. His parents joined the Church and moved to Missouri. Alanson knew and talked with the Prophet, Joseph Smith. He was within hearing distance at the time the Prophet was martyred. They experienced the trials and threats of mobs when they were in Nauvoo. They obeyed Brigham Young when he counseled the Saints to obey their priesthood leaders. His father, Albern, and oldest brother, Rufus, were with the mormon battalion on their march to California. They were released on July 16, 1847 and went to Utah. Alanson stayed with his family at Winter Quarters. He was seventeen at the time. Realizing their need for winter supplies, he went back to Eastern Missouri and bought and harvested crops and brought them back to his family at Winter Quarters. Alanson had envisioned the Great Salt Lake Valley and the trip they would have to endure prior to actually going. They arrived safely in October 1848 with the George A. Smith Company.

In the summer of 1850, he met Chastina Hadlock. They were married on Nov. 10, 1850. They lived in Ogden for about a year. Brigham Young called them to go to Willard. In 1853 they moved to 3-Mile Creek (Perry). Four years later, they returned to Ogden near where the Union Depot is now. In 1860 they were called to go to Hyrum, near Logan and help with a settlement. In 1866 they moved to Huntsville where they lived for the rest of their lives. In 1861 he was made a Captain in the Utah Militia and served in this capacity until 1866. During this time the echo canyon war broke out and he took an active part. He had many encounters with the Indians, one where he and 5 others were called to the Salmon River. One of the 5 was killed, but all suffered from exposure. Alanson was never well after that.

Having a quick mind and memory. Alanson was a diligent student of The Book of Mormon. He was a Seventy and was called on a mission to Nebraska. He served for sometime, but was unable to stay because of ill health. He had a fine speaking voice and would write poetry. He spoke at the Fourth of July event. He was kind and generous to those in need. His employment included farming and working on the railroad. He was with the crew that brought the railroad into Ogden. They had to work hard and didn’t have many luxuries. One son remembered their diet being mostly bran mush and bran bread.

Alanson was an affectionate father. He and Chastina raised a fine family who.all grew to maturity. They were honest and trustworthy citizens. Their children, their birthdates and spouses were:

Alanson David Allen passed away March 3, 1887 at the age of 58 in Huntsville, Weber County, Utah and is buried in Ogden.