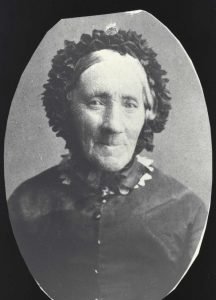 Jane Jenkins was born on 24 August 1806 in Wick , Glamorgan, South Wales. She married William Howe on 7 May 1833 in St. Brides, Glamorgan, South Wales. They made their home in Wick which is a small community near the sea. They were blessed to have four children born to them. They were Cecilia, William, Ann, and Jane. Her husband, William, was the talk of the surrounding country because he was very strong. It was said he could lift great barrels of beer with ease which he delivered from the manufacturers to the retailers.

While the children were quite young, William contracted a prolonged illness and died on 1 August 1846 at St. Brides. In order to support herself and her family of small children, Jane made cookies, cakes, and bread which were put into small home made baskets and the children would sell them to regular customers and at the Southern Down Resort. In order to have a variety of cakes, the mother and children would go down to the seashore when the tide was out and gather larva from the rocks. This substance looked somewhat like lettuce. They washed the sand from it and put it into baskets and buckets. It was later baked as part of the cakes. These children thought nothing of walking three or four miles and selling this food for a schilling a pound. Sometimes Cecilia and Ann worked as nurse girls and as ladies maids.

The mother spent a great deal of time in the grain fields gleaning in order to feed a few ducks and geese which they kept in their yard. These were fattened, killed, dressed and sold in the market at Bridgend, about four miles from Wick. This industrious mother would sometimes make clothing and dye cloth for people. This added a little more to the family income. Her yeast jar was always kept well filled in order to be exchanged for flour.

In about 1863-64, Jane heard from her brother, David Jenkins, that a John Taylor was in Merthyr-Tydell preaching about a new religion. She and some neighbors walked there to hear about this new doctrine. Jane Howe was one of the first persons in the St. Brides area to be baptized into this new religion. She belonged to the Cardiff Branch and there was a great deal of prejudice against this new Church. They performed their baptisms at night and dried their clothes around the stoves in their homes. The children were not allowed to go to school because of their religion.

By this time the children had married and left home and Jane met a LDS widower, William Williams. They married and in 1866 decided to immigrate to Utah. They left Liverpool, England on 18 May 1866 on the sailing vessel, Arch Bright. The Civil War was not long over and the immigrants were ordered to go by way of the Canadian border and the St. Lawrence River. They finally arrived in Chicago and were placed in cattle cars to Missouri. Here they took a boat up the Missouri River to old Fort Kearney which was the outfitting place of the Mormons in 1865-66. They were begged to stay over the winter but William Williams is reported to have said, “I’m going to Zion if I die on the way.” When Jane heard the men cursing while preparing to leave she asked Captain Thompson if they were Latter-day Saints. He answered, “”Well, they’re suppose to be.” She said, “Well, I never heard such language.” While traveling over the plains many became ill because of the bad water and poor food. William Williams was one of them and his last words were, “I am at peace with all men and on the road to Zion.”

Jane Howe Williams arrived in Salt Lake City on 27 October 1866. Being alone and with a place to stay she said, “Well, if this is Zion I wish I were back in Wales.” After about a month of staying with a Welsh family, John S. Davis, in Salt Lake she decided to move to Spanish Fork where there were more Welsh settlers. Here she again began to support herself by doing many of the things she had done in Wales. She would go out and do sewing by the day and many times had walked from Spanish Fork to the swamp west of Springville to gather hops. She used those to make yeast which she exchanged for flour and sugar. Later she married a devout Latter-day Saint widower by the name of David Evan Davis. When she was about eighty her daughter, Ann, who was married to George Crane invited them to move to Kanosh, Utah to be near her. Her husband, David Evan Davis, died in February 1889 and she died 23 December 1889 in Kanosh where she is buried. This story is taken from a short history written by her granddaughter, Maude Crane Melville. Maude’s daughter, Ethel Melville, became the wife of Horace Sorenson, a NSSUP past president and the founder of Pioneer Village.