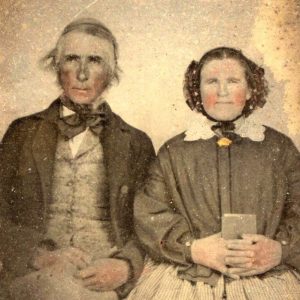 Robert Ustain Orr was born August 2, 1803 at Kilburnie, Ayrshire, scotland. He was the son of James Orr and Anne Houston. He was an engineer by trade, being employed at one of the large woolen mills where wool fabric was woven.

Robert married Elizabeth McQueen in Scotland April 16, 1828, and they made their home at Kilburnie. It was here they were visited by Missionaries from the Church of Jesus Christ of Latter-day Saints. They embraced the Gospel of the Church and Robert was baptized July 28, 1847 at Kilburnie.

Robert and Elizabeth emigrated to America sailing on the ship “Falcon”, March 28, 1853. Robert was 49 years old and Elizabeth, 47. Robert signed on as an engine keeper on the voyage. Listed on the shipping records sailing with them were their children James, 20, Robert, 17, Matthew, 15, Elizabeth 12, Ann, 9, and John, 7. Elder Cornelius Bagnall was President of the Company and the trip across the ocean took 8 weeks. After landing in America they went directly to Nauvoo, Illinois. They crossed the Missouri River and headed across the Plains with the Appleton-Harmon Company arriving in the Salt Lake Valley on October 16, 1853. After arriving in Utah the family made their home in Salt Lake City where Robert and his older sons were employed hauling granite from the quarries in Little Cottonwood Canyon to the Salt Lake Temple Yard.

The family moved to the Tooele Valley and settled in Grantsville in 1855. The years of 1855 and 1856 will always be remembered as the years of famine. Grasshoppers so thick as to darken the sun.

Robert built a log house on the North-west corner of Clark and Cooley Street. Robert and Elizabeth opened a store which they operated for many years in Grantsville. Robert and his sons freighted to points both East and West.

Robert Orr was quite the character on the stage, taking mostly comedy roles. Adept at showing the humorous side of life, he was a good pantomime and had plenty of chances to use his talent. When they were able to have a stage curtain made, he was in charge of running the curtain up and down and kept the coal-oil lamps all clean and filled. The first play they put on was called “Ten Nights in a Bar Room”, which Robert had a part. This play was a favorite for many years and they played it at the opening of each season. They also took their plays over to Camp Floyd, Eureka and Tooele.

Robert died November 7, 1887, and is buried in the Grantsville Cemetery.