For a school assignment Elinor Brockbank Brimhall, a granddaughter of delia booth, wrote the following story when in her teens describing an early experience of her grandmother: 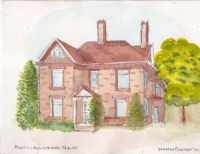 In the year 1860, three little girls lived in a pioneer cottage. Their cottage had but one room with a big fireplace, and a loft where the girls slept was reached by a ladder. It was christmas eve. Delia was six, Gusta four and Susie, the baby was almost two. It was the first time they had ever been told about Christmas and there was great excitement in the little home in Pleasant Grove, Utah.

It was very hard for the little girls to go to bed but finally they were forced to do so; up the ladder to bed went the three little girls. It was sometime before the girls quieted down and went to sleep. Then father, mother and grandmother started to hurry. More love than anything else was put into the preparations, for there was little to be had. Father had whittled three dolls out of wood and grandmother had knit dresses for each doll. These were brought out and put in the tops of each stocking.

For the first time since they left their homes in the east they had some molasses. Mother had made a cake and best of all, on father’s last trip to Salt Lake City he had brought some lump sugar.

There were new little stockings and caps knit for each youngster and bright wool dresses which mother had made. Finally everything was quiet and ready, the little home was spick and span and the fire burned low.

In the early dawn of the next morning Gusta opened her eyes then she woke the others. It was Christmas morning and surely by now Santa had been there. They began getting dressed when a shout came from below.

“The first one down gets a prize,” called father.

What a scramble! Delia reached the ladder first and started down with Gusta nearly on top of her, then came little Susie crying because the big girls pushed and got ahead of her. She pushed and screamed and in her struggle fell through the hole in the roof where the ladder was placed. Down through the hole she went and with a bump landed on the hard bare floor.

What an uproar, it looked as though the carefully planned Christmas was spoiled. Father picked up the baby.

“Well, well,” father said, “it looks as though little Susie beat you all. She was the first one down and she gets the prize.”

The tears changed to smiles like magic. The prize was a lump of sugar, the first the children had ever seen. While Susie ate hers, the other girls were just as delighted to think that little Susie could beat them.

The girls were all happy, especially with their dolls, the first ones they had ever had. Later, they had a big dinner with baked apples, chicken and many other things such as the pioneers had. That night as the girls went to bed Delia said, “I wish it was Christmas every day, even if little Susie did get the prize.”