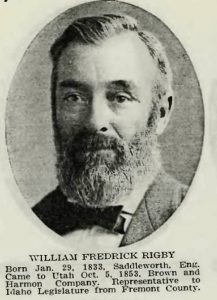 William F. Rigby was born in Yorkshire County England. His mother was Margaret Littlewood who was born on the isle of man off the English Coast. His father was Joseph Rigby, though Joseph and Margaret never married. Joseph had another family. Margaret later married William Howarth and had several children by him. William was given the name of Littlewood and used that name until he came to Utah. He changed it to Rigby at the recommendation of Brigham Young.

Joining LDS Church. When William was 13 years old, his mother died of childbirth leaving eight children besides himself. Two years later William left his stepfather’s home and moved in with his mother’s sister, Sarah Littlewood Wilson and her husband, Thomas Wilson. It was here that William first heard about the Church of Jesus Christ of Latter-day Saints since Sarah had joined the Church earlier. After a few months, he was baptized being fifteen years of age. He began accompanying church missionaries when they taught the Gospel. During these years he worked as a spinner in a cotton mill. In 1852 at the age of nineteen he married Mary Clarke, a member of his branch. They immediately began preparations to emigrate to America. They left England in 1853 and came across the plains. Because they were on the plains late in the year, ten volunteers were sent ahead to notify Brigham Young and get additional provisions sent back. William was one who went, and on October 5, 1853 he met Brigham Young for the first time. In his journal he states: “This was the happiest day of my life, and the dawning of a new era3.”

Employment and Moves. William’s first job was to help build Brigham Young’s beehive house at $1.50 per day. They had no home, but, like many other pioneers, slept outside in a wagon box. The winter was very cold and hard on he and his wife. They finally moved in with a relative, but had to sleep on the floor. William and Mary’s first child died at birth. They took the child of another family whose mother died in childbirth and raised him for twenty months. The baby’s father remarried and called the baby back. This was very hard on both William and Mary. They had moved to Lehi and were living in a dugout. This was their first home, and they were proud of it.

Grasshopper plagues. Times were also hard in Lehi. Indians often ambushed and killed settlers. grasshoppers came in large numbers during the summer. William said in his journal “At times the sun would be darkened when the grasshoppers passed over like a cloud. I saw them drop down on ten or twenty acres of beautiful wheat which was all headed out, and in a few hours there would not be a spear of it left. My wife and I ate so many weeds during the summer that our skin became tainted with green.” He continued making adobe bricks to build pioneer homes. In spite of these trials “we thanked God daily for the knowledge of the everlasting Gospel and for bringing us to these peaceful valleys.”

Move to Cache Valley. Because Lehi was becoming over crowded, Brigham Young sent several families to Cache Valley in Northern Utah. In 1860, William traveled to Wellsville, bought land, built a cabin and walked back to Lehi to get his family. (100 miles walking in 3 days.) The next spring he took his wife and two children by oxen team to their new home. It was here in Cache Valley that William started his Church service. In 1867, he was called to be the Bishop of Clarkston, a town 25 miles north of Wellsville. He moved his family there and helped the community grow and develop. Many settlers felt that a better location for their settlement was down the Clarkston creek onto sunny gentle slopes which commanded a beautiful view of the entire Cache Valley. A majority of the settlers moved to the town that was first called New Town, but later changed to Newton. Some Clarkston settlers wanted to stay, and the next year Brigham Young visited the area and suggested that both towns be retained. They both still exist today. When Martin Harris died in Clarkston, William was one of the speakers. He laid a Book of Mormon on his chest William moved to Newton and became the Bishop of the Newton Ward. He built a log house and then a rock house in Newton. That house still stands today. The front room was 20 x 20 feet and one of the largest facilities in the community. Dances and other social events were often held in the Rigby home.

Expansion to Idaho. Because of water difficulties, the community built a dam to hold the winter runoff through the summer. It still exists as the Newton Dam. William was instrumental in bringing thousands of trees into Cache Valley, furnishing trees for the Logan Temple grounds as well as the orchards of Newton. In the 1880s, William joined others in moving into Idaho and developing communities where the railroad was being built. Eagle rock (Idaho Falls), Rexburg, named after one of the leaders, Thomas Ricks, whose English name had been “Rex”, and his own Rigby, The land around the Snake River was quite wild, but the river and its tributaries was valuable for cities. One of the businesses that needed a river was a sawmill. William invested in several of them as the communities felled the trees and converted the trees into boards. He shared his time between Newton and Idaho.

Polygamy. During these years, William married five additional women in polygamy. Three were the Eckersley sisters, Sophia, Mary Ann and Elizabeth (our ancestor), a cousin, Sarah Haslem, and Ann Yates. He moved Sophia and Ann to his new Idaho settlements, settling Sophia eventually in Teton Valley just over the Idaho line into Alta, Wyoming. This was to help avoid polygamy persecution. Eventually he had to return to England as a missionary to avoid prison. When he returned, he was captured and served six months in the penitentiary.

Last Years. After many years, William was released as Bishop of the Newton Ward and then set apart as the lst Counselor to Thomas E. Ricks in the newly organized bannock idaho Stake (1884). It covered all of the Idaho communities clear to Teton Valley and any areas to the west that included members of the church.

William continued to move between his Idaho and Utah families. Elizabeth and Sarah stayed in Newton in the Rock House. He passed away in 1901 at the age of 68 years.

He helped establish over 25 communities in Utah and Idaho during his life. He was a true Pioneer and enjoyed going into an area and creating something permanent from the land. He paved the way for others to follow.