This Story is about my grandfather jesse brinkerhoff, who was born, May 26, 1867 in St. George Utah. He was the 6th of 9 children born to James and Rebecca Hannah Hawk Brinkerhoff.

First let me give some Brinkerhoff family history. The Brinkerhoff family in America can be traced to Joris Dirkson Brinkerhoff, born in 1604 in Vorden, Gelderland, Netherlands. He Married Susannah Dubles when he was 24, and she was 26 in Amsterdam, and they immigrated to the United States, and settled in New Holland, now New York. 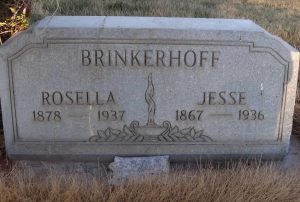 My great grandfather James Brinkerhoff was born in Sempronius, New York in, 1816, and when he was 26 years old he joined the Church of Jesus Christ of Latter Day Saints, and moved to Nauvoo with his wife Sally Anne Snyder, and their children. When the Saints were driven from Nauvoo, the family followed west to Utah and settled on Shoal Creek in what is now Davis County. In 1852 he was asked by Brigham Young to practice polygamy, and he married Eliza Jane Henderson, and my great grandmother Rebecca Hannah Hawk. He was double her age; he was 36, and she 18. James was a canal builder, and was asked by Pres. Young to move to St. George, where my grandfather was born. James died on March, 4, 1875 at the age of 59.

After his death my great grandmother took her 9 children, and settled in a new community, Huntington, originally called Prickly Pear Flat.

And now back to the story of my grandfather Jesse Brinkerhoff. He was not the president of the church, not an apostle, stake pres., a bishop, or even a mayor. He was a humble farmer, a loving father/husband, and a great man. When Jesse was 27 he married his sweetheart Clairinda Rosella Riley in the manti temple, on Sept. 20 1894, she was 16. They had 14 children. Their first child Herbert was killed in wagon accident at age 13, but all of the other children lived to adulthood, remarkable for those days. On April 6, 1898 a daughter, Ivy May, was born. Ivy was a beautiful child with Black hair and big brown eyes, and was a big help with to her parents in doing house work and caring for her brothers and sisters.

Aunt Ivy 16 married Elmer Black 21 a long time friend and neighbor, on July 31 1914. They moved to Shelly Idaho, and bought a small farm, worked hard and were happy. They had two sons Elmer Reed, and Ford. They were very poor, but so were their neighbors, and they had many friends, and things were good until Dec. 5 1918 when Elmer died during the flu epidemic.

The flu epidemic of 1918 sometimes known as the spanish flu, reeked havoc across the world killing an estimated 100 million people, more than 500,000 in the US, and killed mostly strong healthy adults. Fear spread the country, along with the flu. Hospitals were full, health professionals died, Schools, churches, public buildings, etc, were closed, and people feared being around others. Little girls made up jump rope rhymes, and here is an example, “I had a little bird, its name was Enza, I opened the window and in flu Enza.

Ivy did not have a phone, but went to town and used a phone at a store, and called her father Jesse and, and in tears told him that her dear husband Elmer was dead from the flu, and that no one would help her bury him. He instructed her to wrap his body in the blanket on the bed, and drag him to the front porch, lock the front door, and use only the back door. He told her to burn all of Elmer’s clothes and the other bedding from their bed. He told her to have a bath, and then to wash all clothes and bedding in the house in lye soap and boiling water, and then wait for him to come. He didn’t have a car, so he loaded up supplies for a long trip, about 340 miles, and started for Shelly. My grandmother Clairinda was 7 months pregnant with my uncle Clark, and she had a whole house full of children, my father George, 10 years old one of them. In 1918 the roads were not very good, and grandfather had to go to Price then over Soldier Summit, and down Spanish Fork Canyon, which was a hard trip even in summer.

From Provo the roads were better, and he might be able to buy supplies, if he could find a store open or a farmer willing to talk to him. It probably took 2 weeks to make the trip, that would be 25 miles a day, and it could have been longer. He would have to carry hay for the horses, especially in the mountains. I can only imagine how difficult this trip would be, away from his family he loved so much, and camping in the snow day after day, all alone, to help his grieving daughter. During this time Ivy and her two sons were in the home shunned by neighbors who had been friends before, but who now would offer no help. How hard it must have been for Ivy and the little boys to know that Elmer was dead and frozen on the front porch of their humble little home. When Jesse arrived, he took his daughter in his arms, and tried to console her, and then went right to work to dig a grave in the frozen ground where he buried his Son in law.

There was no funeral, no one to speak kind words of solace, no family dinner by the Relief Society, no friends. The casket was a crude box made of boards from the barn or a fence. After the burial Jesse would not dare give his daughter a hug in parting, after handling the body, and probably left for home. The trip home would be more difficult, because it would be harder to get supplies, for him or the horses. If he found a store open or a farmer who would deal with him after being in contact with the flu, he would have to bargain for what he needed then leave the money, and then pick up the supplies in another wagon, and have no contact. I believe that Jesse spent Christmas on the road, and it was probably like every other day, cold, wet, lonely, and sad.

Jesse did not want to put his family at risk, so when he arrived home he made a bed in the barn, and lived there for the next 6 months. In the spring Ivy packed her few things and the boys and took the train to Price, and then by wagon to her parents’ home in Huntington. Aunt Ivy worked hard and bought a small farm and raised her boys. I remember going to her farm when I was a boy. Ivy died on March, 28, 1949 at the home of her son Elmer. She never re-married, and was a widow for 31 years.

The children of Jesse and Clairinda are

Jesse Brinkerhoff died on April 30, 1936 in Huntington just a year before I was born in Idaho Falls not far from Shelly. I never met him, but I know he was a great man.