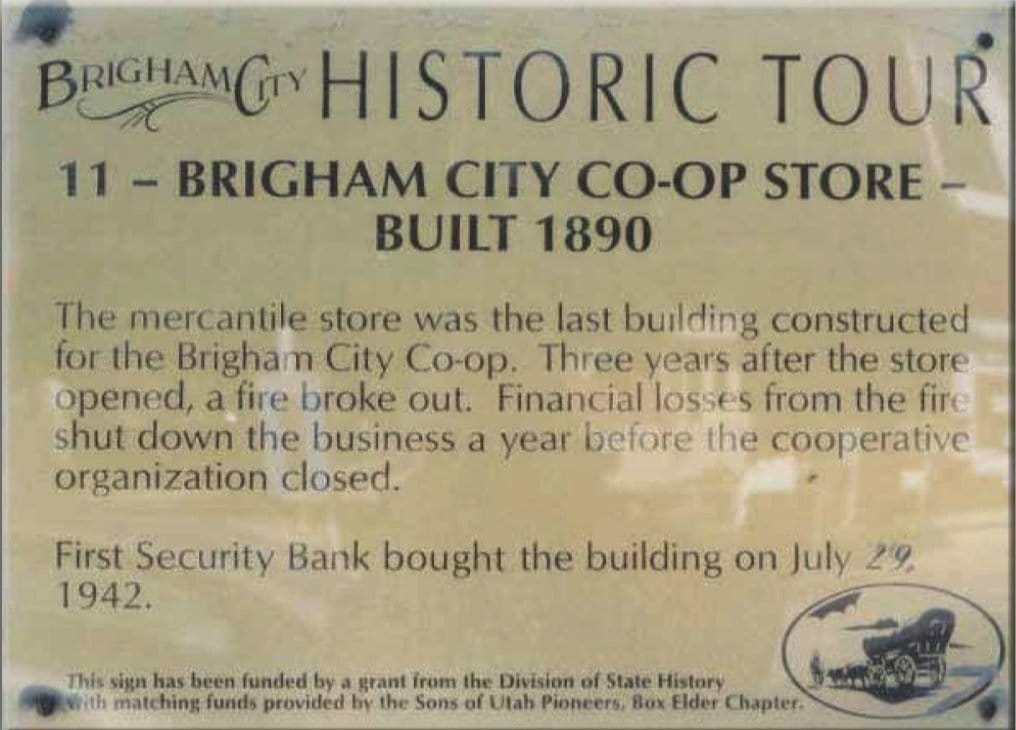 “Let every one of the Latter-day Saints, male and female, decree in their hearts that they will buy of nobody else but their own faithful brethren, who will do good with the money they will thus obtain.” —Brigham Young, Journal of Discourses, 11:139

In the 1860s, the economic situation in Utah was changing rapidly due to the inﬂux of non-Mormons. Brigham Young was concerned about the impact of these changes on the Mormon settlers, so he set in motion measures designed to build and strengthen the Latter-day Saint covenant community. Among these was a renewal of economic cooperation.

When the Saints ﬁrst arrived in the West, they had no choice but to cooperate for the public good in building infrastructure for housing, community needs, farms and so on. This included public buildings, roads, irrigation canals, fences and more. The measures of the 1860s expanded those initial efforts in many ways. The ﬁrst of these new programs was the highly successful Brigham City Cooperative Association, founded by Lorenzo Snow in 1864. Brigham Young then called for similar efforts throughout the territory. In 1868 Church leaders developed a plan to establish a cooperative store in every ward and settlement. In Salt Lake City, Brigham Young and local businessmen established Zion’s Cooperative Mercantile Association (zcmi), which acted as the central wholesaler to the local cooperatives being created in every settlement. Within a short time, 150 retail cooperatives were organized in Utah, with additional cooperatives in Idaho. The distinction of having the ﬁrst “ward store” in Salt Lake City belongs to the members of the Tenth Ward, who completed the organization of the Tenth Ward Co-op before February 2, 1869.

The cooperative movement was motivated by both practical and religious concerns. Economically, church leaders wanted to control prices in the region so that all businesses operated with the public interest in mind. They also wanted to maintain independence from the non-Mormon merchants, who were often vocal critics of the church but nevertheless reaped inordinately high profits from their business dealings with the Saints. Furthermore, they wanted to offset some of the possible negative impacts of the transcontinental railroad, which was quickly reaching Zion’s borders. Particularly, this new transportation highway would ﬂood Utah with inexpensive goods, destroying the local economy and immediately integrating the area into the national market economy. Local residents would ultimately supply only raw materials to the East and then, out of necessity, be compelled to repurchase the ﬁnished products at a great economic loss.

In all of this, Brigham Young was inspired by the principle of consecration revealed through Joseph Smith. The Saints needed to live this principle if they were to truly establish Zion as Enoch had done. Brigham Young stated that the cooperative movement of the 1860s was “only a stepping stone to what is called the order of enoch, but which is in reality the order of Heaven” (Journal of Discourses, 13:2). With the success of the cooperative movement of the 1860s, Brigham Young promoted the concept of united orders beginning in 1874. He did this not only to lessen the impact of the previous year’s nationwide economic panic, but also to promote moral reform and emphasize the principles of consecration. Anticipating that there might be some reluctance to move away from the prevailing capitalistic economy, President Young instructed bishops not to push their members any further than they were willing to go toward cooperative living. This resulted in a wide variety of organizational forms.

Some united orders were established but were quite short-lived, such as those in St. George and Richﬁeld. Expectations had been high at organizational meetings. Most felt that the order would result in greater production, more economical consumption, lower costs for producing goods and equalization of incomes at continually higher living standards. But in the face of this, as one brother wisely stated, “it takes pure people to live pure principles.”

In the urban centers of northern Utah, each united order typically sponsored speciﬁc business enterprises. Such orders were established in Utah Valley, Cache Valley and Bear Lake Valley. In the more isolated communities in southern Utah, they often included a more thorough restructuring of society. In Orderville, for example, all members of the community ate their meals in a community dining hall; wore similar, locally produced clothing; and pooled their resources to operate an array of communally owned enterprises. Most of the orders lasted only brieﬂy, but Orderville functioned in this way until the mid-1880s, when it was disbanded amid the pressures of anti-polygamy raids. Though ultimately short-lived, the united order movement helped to shield the Saints from economic ﬂuctuations, facilitated important building projects such as the ﬁrst four Utah temples and inculcated the ideals of industry and cooperative effort that would inﬂuence the welfare program of the following century.

This article originally appeared in Vol.59 No.1 of Pioneer Magazine