A Master Plasterer
and his son John Burt 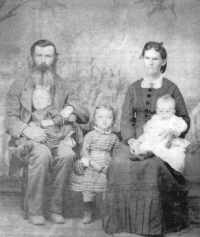 Many are the inspiring and interesting stories that come through our pioneer ancestors trials  and experiences.

William Burt was  my 4th great grandfather who did much of the decorative plastering on the Manti Temple.  But the interesting story about him is that in 1864 in the middle of building the Salt Lake Theatre in Salt Lake City, the building was at a point where they were ready to run the ornamental plastering cornice where the walls and the ceiling meet.  The building superintendent mentioned there was a need for an ornamental plaster, but commented that he did not know of anyone who could do that kind of skilled work.  A man who was working on that job commented that he knew of a man who had “just come over from the old country” who could do that.

The construction supervisor told him to “go get him”.  When he was summoned, they found out that he was a master plasterer as is indicated in the book Temples of the Most High”, so he could easily accomplish what they wanted.  He was given the job of running 120 feet or ornamental cornice where he would put the plaster into his mold, then place it up against the ceiling until it would adhere and hold fast.  He would then repeat the process and continue doing so until the job was finished.  He ran the entire cornice in one day which was an outstanding feat for that time.  He was thereby given $100.00 for his work as well as $20.00 for his assistant. That would have been an outstanding wage for one days work, but they paid him for being a true artisan.

In 1884 he moved to Provo to plaster on the Brigham Young Academy as well as the state hospital.  While there he plastered many other buildings.

In 1885 he went to Manti where he was the head plasterer over the ornamental plastering work in the Manti Temple.  One may still see a small portion of his work, however, most of it has been demolished during the various remodeling stages that have taken place since then.

He was supposed to do the ornamental plastering work on the Salt Lake Temple, but the Manti Temple took too long to finish so this assignment was given to another. I now realized why my father and uncles were plasterers while I was growing up.  Their trade was passed along from father to son as was a common practice at that time.

Williams’s son John Burt was also a plasterer, having been taught the trade by his father.  Both William and John did ornamental and normal plastering on the Manti Temple. We now go into a direct answer to a promise made by President Brigham Young during the ground breaking that no one would be killed working on the Manti Temple.

Louisa Love told this story during the 1950’s.  Their family home in Manti was just down from the Temple Hill.  Children in those days were not very different from young people today.  She recalled that when her father left for the day to work on the temple that she and her sister were given chores to do.  As is typical for many little girls they wanted to play more than they wanted to do the chores or work that had been assigned to them. About noon time they would see their father coming down off the temple hill for his noon lunch.  When they saw him coming, one sister would quickly grab a broom and start to sweep the house, while the other sister would quickly grab the dirty dishes remaining on the table and place them in a large dish pan.  She would then throw them under the bed just before her father would enter the house.  So, to her father it looked as though the two girls had been working the entire morning, and the work assigned had been done.

One day John Burt, a son of William Burt, was plastering on the temple about 90 feet above the ground when a man working next to him stepped off a plank which caused the scaffolding to tip.  Immediately John jumped to the scaffolding below him which would have been about 3 to 4 feet. The plank broke and he went right on through falling 84 feet to the ground into an area of large and small stones called “The Rock Chipping Area” or just called “The Rock Chippings”.  Workers rushed over to him to discover that he was hurt, but had no broken bones and was still alive.  After 10 days resting and recovering, he was back working on the temple as a direct fulfillment to President Young’s promise.

William taught the Gospel as well as many timely lessons to his children.  One was never to speak against the leaders of the church.  He also loved singing the church hymns and was often participating in the ward choirs.  He loved to read good books especially about the lives and works of the church leaders.  He regularly did so until around 1:00 or 2:00 in the morning.  Even though he retired late into the night, he was always up by 4:00 or 5:00 in the morning working in his garden.

Following these many a varied plastering assignments, William moved  to Salt Lake, when on 28 August 1902 he suffered a stroke and passed away shortly thereafter.