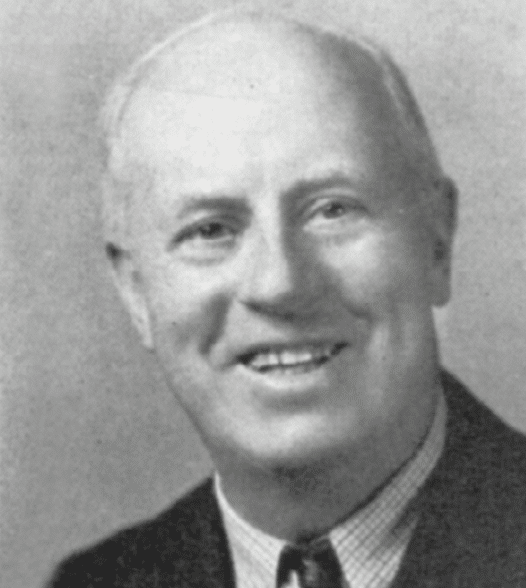 Thomas Franklin Kirkham: “Santa Claus! Trekkers will not soon forget the silky abundance of his white beard. Born July 20, 1882, in Lehi, [Utah,]… about 20 years before his brother Ray [first president of the Los Angeles sup]. Lists the following as newsworthy achievements: Missionary to Germany, 27 years as ward clerk, and has never tasted tee, coffee, liquor or tobacco. So popular as a Sunday School teacher he’s [was] one for 40 years. Graduated from BYU before taking up his profession as an accountant and insurance man. Married Margaret J. Cavanagh and they have two children.” —D. James Cannon, Centennial Caravan (sons of utah pioneers, 1948), 29.

Up this morning at 4:15 for an early breakfast. It’s a grand day. The 161 Missionaries of the Northern State Mission assembled in Nauvoo and on the Temple Campus as we prepared to depart for the long Trek [with] that grand old hymn, “Come, Come Ye Saints,” and “God Be With you Till We Meet Again.”

“Wagons” going out of campus now called out by number over our public address system. It’s a great sight to see them leave. Our number is “51.” Going down Nauvoo Main Street amid the cheers of thousands of people at 8:06, we are off for Montrose. The streets where we passed were thronged with people waving us and cheering a farewell.

At Council Bluffs at 3:35 pm. Met Brother Francis A. Child, President of the Western States Mission. The program here is being broadcast over a national hook-up. The Announcer asked Apostle Kimball “10 Questions.” Elder Kimball without any warning of the questions gave masterful answers.

Out on the highway had an accident. Wagon in head of us stopped. We stopped. Wagon next behind us stopped but car behind it crashed into it and drove it into our “Wigon” crashing our Wagon rear end. With wire, rope, etc. were able to tie ourselves together and limp on overtaking Caravan later.

Today is my 65th birthday…. On the way to this spot [Martins Cove] I opened a Birthday box of candy given me by Phyllis and Ez on our departure from home which was not to be opened until today. We enjoyed the contents very much, and gave many other Trekkers of it too We proceeded on from here toward Rock Creek, the scene of Willie’s handcart tragedy…. To reach Rock Creek a seldom traveled dirt road through sage brush hills had to be traversed. [Our] car is not only built low but those who helped us build the “Wagon Box” at Nauvoo designed our box even lower so that when we got on this dirt road crossing the first wash we broke the rear of our box The Caravan was far out of sight…. Luckily the last wagon to pass us, Brother Adrian Cannon had lumber with which we made the repairs

The distance we did go we could travel only 5 to 10 miles per hour and much of it up steep grade which made the engine boil and the “Wigon” dragged the high center in the road. We had very little water with us. We stopped. Soon Brother Francis A. Child, President of the Western States Mission, came back from the Caravan which was already camped at Rock Creek 50 miles away…. They gave us 2 quarts of water they had in a fruit jar and that with what we had we decided to try once more. The high center dirt road and our low built “Wigon” made so disheartening that we stopped, took counsel, and decided to give up the Rock Creek Camp.

With much difficulty we found a place in the road wide enough and with more difficulty turned about face and went back to the highway. We left a note in a pile of rocks in the center of the road telling that we would join the Caravan at Rock Springs.1

“We decorated those front cross braces [of four ‘Wagon’] with two oxen skulls Then to the left of the side door may be seen my grandfather’s sword which he carried over the plains to Utah in 1859. By the wagon door on the opposite we hung Grandfathers 45-70 rifle. 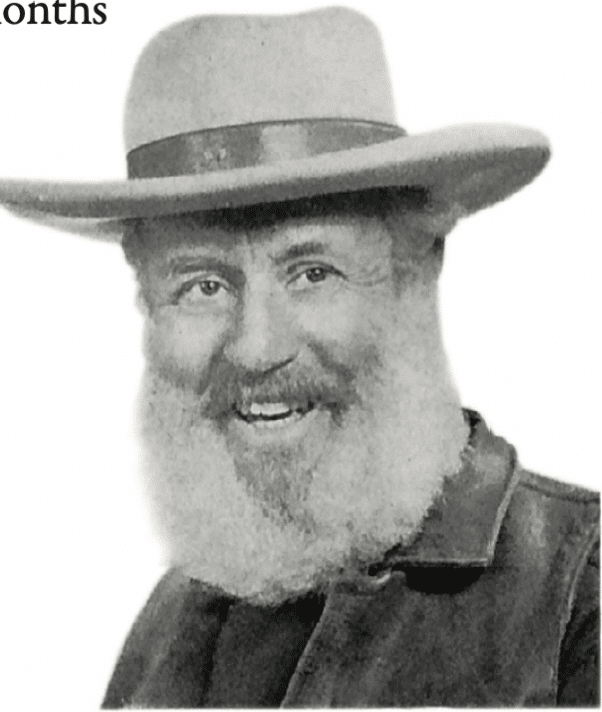 “To make this trek most of the 143 men grew a crop of whiskers. During the eight r preceding the Trek I put my shaving outfit on the shelf and grew a long white (gray) beard. I was often called “Santa Claus.”2