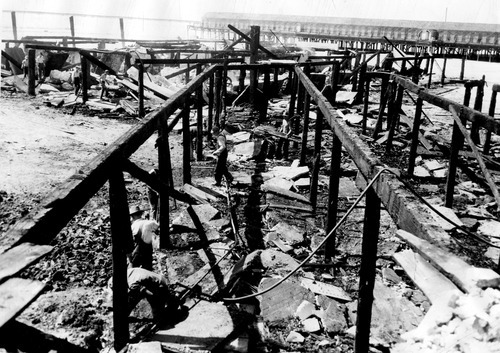 saltair, the grand old ‘Lady of the Lake’ and once acclaimed the ‘Eighth Wonder of the World’ now lives only in the preciousness of memory, the fond remembrance of thousands who enjoyed the classic recreation facility for some 74 years—1883 to 1957. A third major fire over the memorable history of the resort, on Nov. 12 at 4 a.m., finished off the grand old structure and practically obliterated all hope that it will ever be restored or replaced.

Damage to the vast dance pavilion was estimated at $500,000 by Sheldon Brewster who for many years has spearheaded an heroic effort to restore the once-famous recreation center and tourist attraction. Mr. Brewster, sons of utah pioneers devotee and avid preserver and restorer of pioneer treasures, had been trying to raise $250,000 to restore Saltair. The non-profit corporation he headed had a lease on the place from the State of Utah.

The burning of Saltair was described by veteran fire fighters as one of the most spectacular in mountain history. It was noticed first by two deputy sheriffs, Sgt. Merle E. Coon and Deputy Grant Peterson when they drove by the Garfield Smelter four miles away. As they sped to the scene, they radioed in the fire alarm.

Firemen found it was impossible to get their trucks past the end of the asphalt driveway, 300 feet from the flames. The majestic dome over the dance floor, once billed as the largest in the world, had already crashed in before the firemen arrived.

The lake water having long since deserted the grand old lady, the nearest water source was that of the Morton Salt Company, six miles away. All the fire fighters could do was to stand by and watch the fireworks. Crash of the two-story entrance occurred at 4:30 a.m. Sparks and embers bounced high and the flames “shooshed” about as oxygen was forced into them [from] falling beams. Two spectators reported they saw the flames from the upper avenues of Salt Lake City and described the spectacle as “a huge orange flying saucer coming in for a landing.” Despite a steady rain, the fire burned more than 12 hours.

Meanwhile the undaunted Mr. Brewster is still hopeful that a new Saltair will emerge from the ruins of the old. “This will have to be a complete new Saltair,” he predicted, “after the appearance of the old one. We are hopeful and somewhat confident that we can interest important capital in a magnificent new recreation facility out on the lake shore.”

Few are alive today who can recall that day in 1891 when there appeared in the newspaper a notice that Col. Nephi Clayton, Henry Snell and the White Brothers Co. had joined other Salt Lake investors in planning a new bathing beach facility out on the Great Salt Lake. Three miles of beach were purchased at the south end of the lake, which even then was ebbing from its former high water mark. A stage line to the proposed resort was planned, then interest waned until the following year when George Q. Cannon, a member of the First Presidency of the Church of Jesus Christ of Latter-day Saints, became interested.

Pres. Cannon thought a pavilion and outing place would be a very good idea. He thereupon organized the Saltair Beach Company and sold bonds to get the enterprise off the ground. A railroad track was laid and construction commenced on the lake piers and pavilion.

On May 29, 1883 the resort was ready for the grand opening. Then a ferocious gale from across the lake blew down the steeples and cut the sewage connections to the bathhouses and pavilion. But the excited patrons came to Saltair despite the damaged facility, and in even greater numbers 11 days later when Gov. Caleb W. West, President Wilford Woodruff and civic leaders from Provo, Ogden and Salt Lake City gathered for the formal opening ceremonies with more than 10,000 celebrants.

Engineers toured the pavilion and tabbed it “a marvel of mechanism and an architectural masterpiece.” They enjoyed “an entrancing panorama” from the pavilion towers and heard Gov. West admonish the people “to bathe often in this exhilarating salt water to keep clean and healthy.” But mostly they came to swim and dance, and the history of Saltair is a chronicle of the ebb and flow with which they did this, according to the level of the water and the nation’s yen for recreation and fun.

Ownership of Saltair passed into private hands in 1912, and in 1923 it went into control of Zion’s Savings Bank & Trust. In 1918 the railroad line was electrified. Meanwhile the resort was being enlarged, a hippodrome built, hundreds of beach houses set up, arcades erected, concession stands placed round about and a huge racer [or roller coaster] installed.

In one of these concession stands, “The Cave of Ala Baba,” a fire broke out on April 22, 1925, and practically destroyed Saltair. Damage was estimated at nearly $500,000. By the following summer, the place had been rebuilt and still further enlarged.

As the lake receded, interest in salt water bathing declined until only tourists who were guided there for the novelty of the experience were about the entire patronage. In 1954 Herbert Snow took over the resort, and forthwith sank $80,000 into the enterprise and planned to spend even more.

On August 29, 1957, a “freakish wind” blew across the lake and toppled the huge roller coaster. Previously the coaster had caught fire in 1931 and was severely damaged. After the “little tornado” hit in 1957, the [ride] was abandoned and never rebuilt. Saltair never opened for the 1959 season.

It was not that nobody was interested. Dr. Thomas C. Adams, commodore of the Salt Lake Yacht Club, irked at state inactivity anent the resort and dissatisfied that the State Parks and Recreation Department had declared it unprofitable, tried to find private capital to restore the historic old facility. He was alone at Saltair one morning picking up debris, his regular weekend routine, when he died on Nov. 8, 1965.

Then followed Mr. Brewster and four more years of hard work and frustration by a man who loved Saltair as a youth and saw its tourist potential in a day when tourism had became Utah’s first industry. Sheldon Brewster’s vision of a new Saltair as a lure to tourists may not be an idle dream. It could be sheer inspiration!