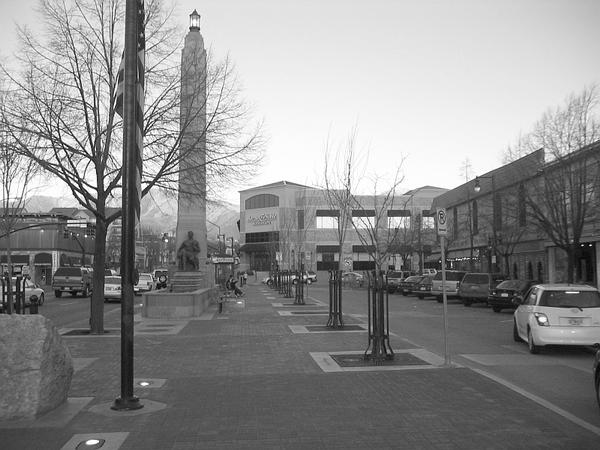 I was born and raised almost on the banks of Parley’s Creek in old Sugarhouse, which is located in the mouth of lower Parley’s Canyon. The creek now runs under the Keith O’Brien store and the McIntyre Development.

In my time, the creek was open and ran down 21st South to 10th East, then a little north, crossing Lincoln St. just in back of the Lincoln Ward where it is now, only underground. It emerges for awhile in its original channel in the old Strevel Park, now the Richard’s Clinic, after crossing 9th East.

In the very early 1900s, Hollywood Avenue didn’t exist. It was part of the old W. B. Richards farm and orchard, but I’m getting a little bit ahead of my story by not telling of the early settlers in this area.

The W. B. Richards home was built on what is now Hollywood Avenue, just above 9th East. The farm encompassed all the land from 9th East to 11th East and over to Parley’s Creek. Willard B. Richards, Sr., who I understand was born in Nauvoo, built a beautiful pioneer home on this property. He had beautiful barns and full-blooded horses and a large fruit orchard. Also in the story is his son, Preston, as he was called. The old home is still standing and should be designated as a historical landmark.

The old W. B. Richards home contains many pieces of furniture brought across the plains. Joy Richards, the present owner, told me the old style piano — which is like the one in the Lion House — was brought by covered wagon and cached in a cave in Echo Canyon because it couldn’t be carried over Big Mountain and Little Mountain. It was later retrieved when the trail down Silver Creek and Parley’s was opened.

Just to the north of the Richards farm, my grandfather settled. He was Daniel Heber Kimball, a son of Heber C. Kimball. Later an apostle, Steven L. Richards built a new, beautiful home across the street on 9th East. In back of our home, Apollas Rockwood built a home, and it is interesting to note that he started the first ice company in the area.

The ponds used for the ice were just below the old penitentiary. Ice was cut and stored in sawdust and he personally delivered it. Later the Free brothers, Huron and Ray, started the present Hygeia Ice Company, also on the banks of Parley’s Creek.

In those days, 9th East was unpaved with the new street car riding on raised tracks, so the periodic flooding of Parley’s Creek would not take it out. There was only the little reservoir at Suicide Rock to hold the spring runoff and we would often get a lot of flooding.

We didn’t have electric lights that far out, so my father Ernest Kimball, being the inventive sort, in conjunction with the Richards, put a water wheel in the creek about where Lincoln Ward is now. This drove a small dynamo which furnished electricity to the neighborhood.

When we had lots of water, we had bright lights. When the water was low, the lights were red colored. My father bought my grandfather’s home at 1935 — 9th East when he got married. I was born in the same house he was. Dr. Steven L. Richards took care of all the births, broken bones and injuries in the neighborhood, using his house as the operating room and hospital, always assisted by Hattie Garn.

Later my father went to work for the old independent telephone company, but we didn’t have telephones out there in the country. He put a hand ringer circuit between us, the Richards and Rockwoods. Apollas Rockwood was on a mission, so the phone enabled Mrs. Rockwood to call if she needed help.

Lincoln Street and Hollywood Avenue, where the old Garff home stands, was originally the Orchard House, a summer home-type house which was quite large. This was the center in early days for parties and entertainment. We had spooky Halloween parties there and the Richards boys enjoyed trap shooting. There were Willard B. Jr., Zabriskie, Preston, Paul, Annie, Joy, Martha and Louie Gill Richards besides the Kimballs.

The Kimballs, who lived on 9th East, were sons and daughters of Daniel H. Kimball. There was Carl, Ernest, Louis, Lester, Charles and Kate. Carl Kimball and Claude and Stayner Richards formed the old Kimball and Richards Real Estate Company that developed Highland Park.

Stayner was the first Bishop of [the] Highland Park Ward. His home still stands on Alden Street. Claude’s home, the large home on Stratford and Alden Street, is also still standing.

It is interesting to note that Apollas Rockwood and W. B. Richards, Jr. started the present Granite Furniture Company, also on the banks of Parley’s Creek. W. B.’s sons, Henry and Steven, now manage this business. The Rockwood Furniture Store next door is run by J. A. Rockwood’s sons.

Motor cars came into the valley and W. B. Richards got the first one-cylinder car, which caused quite a stir in the neighborhood. We all had to have a ride in it.

My father soon got a hand-cranked car, as did Dr. Steven L. and Steven L., Jr. Andy Davidson ran the blacksmith shop just in back of Lincoln Ward, and so when things went wrong with a car, into Andy’s blacksmith shop it went along with all the horses. Art Hoaglung, the young blacksmith, soon became the local car expert. (Henry Richards still has the original car).

At this time, all the area of Sugarhouse and the area south and west to State Street until it joined Forest Dale Ward, was Sugarhouse Ward in Granite Stake. The old stakehouse was on 33rd South and State Street, where Prudential Federal is now. It was decided to divide the ward, as the Richards had opened Hollywood Avenue and along 9th East. W. B., Jr. lived in the old home of Lorenzo Snow straight across from us. This home is still standing. So old Sugarhouse was growing.

Ramona Avenue was cut and settled, as was Hollywood Avenue from 9th to 11th. The old farms were gone. The new ward was called Richards Ward. Bishop John A. Whitaker had presided over Sugarhouse for about 30 years. The first bishop was J. A. Rockwood. We had no church to meet in. I guess they didn’t share meeting houses in those days, so it was decided to do something about it immediately. A circus tent was rented and erected right on the bank of Parley’s Creek and all around it were erected small tents for classrooms. A pulpit was also built.

The kids thought it was great, sawdust floors and all. To raise money, my father and John Donaldson got together a minstrel show led by J. Spencer Cornwall. Most of the Cornwall brothers were also in it. They put on shows all over the area. They were excellent singers — one of the best groups in the valley and they made money. They called themselves the Swanee Singers and they are still going today. The ward finally built on its present location on Garfield Avenue and it has recently been replaced.

Parley’s Canyon was the main attraction in our lives. We would hike up the railroad tracks into the canyon almost every Saturday in the summer. The big Mallett ore engineers were something to watch. In the early days of the area, Parley Pratt acquired the property in a small canyon branching off Parley’s called Mount Air Canyon. He built a home there, as did members of his family. His home was called Parley’s Happy Home.

Soon the local people of Sugarhouse built homes there also. Some of them included W. B. Richards, Sr., Steven L. Richards, the Rockwoods, Carl Kimball and D. A. Affleck.

We also had a cabin there. There was a large hotel at the top called “Pine-Top.” In the early days stage coaches ran up there. Later the passenger train stopped at the mouth of the canyon and the horse-drawn bus would take them up the canyon. This was [a] favorite sport for all of us, like Yellowstone is today. My folks would give the engineer milk and fresh bread, and we kids would hike down the canyon and meet the train. They would stop and we got the groceries.

When cars finally made it that far, Mount Air was a problem. It was very steep and the gas wouldn’t feed into the carburetor. The cars had no pumps, but were gravity fed. It is told that one of the sights to see was Dr. Richards astride the steering wheel of his car going backwards up the canyon, so he could see where he was going. By going in reverse, gas could flow into the engine.

Where 20th East crossed the gully, as we called it, my father pointed out an old adobe house. It was used by the golf club until a few years ago. He told me it was called the “pest house” and this is where people with smallpox were quarantined. It seemed awful to me, but smallpox was a terrible disease in the early days.

Further up the canyon, just about under the new SUP building site, but across the canyon, was the halfway station on the stagecoach route.

It was still operated then on the old road in the bottom of the canyon by two elderly women. I was informed that in addition to water and pop, stronger drink was obtainable during prohibition. The old foundation is still there. Further up the canyon on the stream, in about the center of the golf course, another stage station was erected. Some dead poplar trees mark the spot.

The railroad had a water tower just below Mount Air Canyon and another one was at the mouth of Lamb’s Canyon. The next stage junction was at the old Kimball’s ranch at Kimball’s Junction (still standing). The ranch was run by William Kimball. Dan Kimball, who lived on 9th East as previously mentioned, first rode the Pony Express from Ruby Valley to Salt Lake and later drove stage from Salt Lake to Echo Junction.

Farrell’s Glen, a small canyon opening just opposite the cement works, also had a hotel in the early days. Stagecoaches went up there from Salt Lake, so small way stations were necessary for watering both horses and trains. Later the old cars all followed the stream to get over Parley’s Summit, which was quite a feat in a Model T. They all carried desert water bags hung on the side.

Parley’s Canyon has had quite a history. Initially a toll road called Parley’s Golden Gate, it has been used by covered wagons, Pony Express stagecoaches and railroads. Now it is a super highway, which almost wiped out its beautiful trout stream and trees, but not its colorful history.

Even in my time, herds of sheep with their horses, dogs and wagons went up 27th South and through Parley’s Canyon to the summer ranges around Park City.

[Editorial note:] This story is according to my recollection of 65 years ago and stories told me by my father and grandfather. There may be some slight inaccuracies in some things, but it is hard to verify now that so many people are gone.