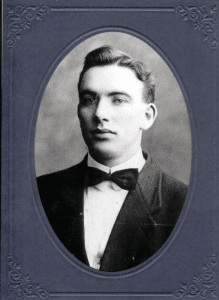 He spent his early life in a pioneer community. He did his share of work required to provide for the family needs. After completing the grade school, he attended the Fielding Academy in Paris, Idaho. This ended his schooling.

Stories of the pioneers, returned missionaries and the zeal used by church members in living and spreading the restored gospel were part of his daily life, and became so worked into his daily activities, it became a way of life for him.

In 1909 a call came from the Church to go to New Zealand as a missionary. This he did and was appointed editor of the “Messenger,” the English edition of the mission paper and helped in translating articles into the native language.

Returning home in 1912, he secured employment with the Union Pacific Railroad, at Evanston, Wyo. His job was terminated by a call from the church to return to Woodruff and serve as bishop. Acquiring some property and a house, he was ready to assume added responsibilities.

After being released as bishop he continued his activities in the church. Men’s mutual, stake high council, and other priesthood assignments.

He served as county clerk for some time and was elected to the Utah Representatives for four terms, thus serving as a lawmaker for eight years.

He moved to South Ogden and found employment with the Aultorest Mortuary. He served as scout commissioner for four years. Later he gained employment at Hill Air Force Base, where he remained until he retired. This proved to be a very much needed help financially. It provided the means needed to care for his wife when she became stricken and remained bedfast for seven years. She died June 27, 1967.

Mr. Tingey acquired some motel apartments in Kaysville and managed these until his death. He was an active member of Buena Ventura Chapter of sup. He hauled cement and other material for the erection of the pioneer marker that stands on a hill east of the Bear River crossing. Later he attended the dedication of the marker.