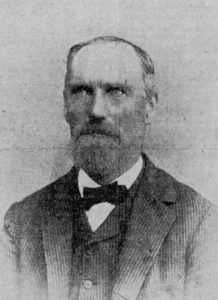 edwin booth was born in the English town of Blackley Lancashire England on September 12, 1833. His parents joined the “Mormon” Church and migrated to Nauvoo in 1840. At the age of 14 Edwin signed on as a cabin boy on a riverboat that operated between St. Louis and New Orleans. Two years later he returned to find his father had died and his mother, a brother and a sister had joined the exodus and gone to the Salt Lake Valley. He bought a horse and rode it to the valley.  He arrived in 1851.

He was always the first one into the saddle if there was trouble. This included the handcart rescue, two Indian wars and as an aide to Lott Smith in harassing Johnson’s Army by Fort Bridger. It was noted in Lott’s biography, “I needed to get a special dispatch to Brigham so I chose my most dependable horseman, Edwin Booth. Following his service with Lott Smith, he rode with the Pony Express for one year.

He married Ann Maria Mosely September 9, 1855.  They lived in a home in Nephi which is still occupied.  Here their 9 sons and 1 daughter were born and raised.  His occupation was related to the sheep business.

In his later years, he was always very active in church and civic affairs. During this time his hobby was drama in local theatres, preferring comic roles.

One year he took the train to Chicago to visit a relative. While the train was delayed at an Arkansas station, Edwin struck up a conversation with a local man and gave him a Book of Mormon. After exchanging several letters between the two, the man joined the church.